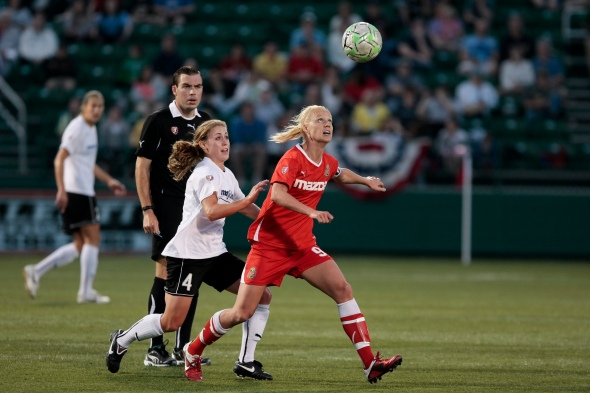 After her two-goal performance led the Western New York Flash to a 3-0 win over magicJack on Sunday, Flash midfielder and captain Caroline Seger earned WPS Player of the Week honors for gameweek 7. The Swedish international becomes the fourth Flash player in a row to win the award.

“I’m very happy to have won this, but I want to say thanks to my teammates because without them I wouldn’t have gotten this,” Seger told Our Game Magazine. “They make me play well and it’s easy to be good when you have 10 others that help you out there.”

The Flash, who lead WPS with a 5-0-1 record, had three other players earn this honor this year, beginning with Christine Sinclair (week 4), Marta (week 5), and McCall Zerboni (week 6). Seger makes it four in a row for the league leaders.

“We’re a good team and we work well together,” Seger said. “We improve every week and grow as an unit the more we get to know each other. We hope to develop as long as the season goes on and play good and entertaining soccer.”

This entry was posted on May 25, 2011 by ourgamemagazine. It was filed under Sweden, WPS and was tagged with Caroline Seger, WNY Flash, Women's Professional Soccer, WPS, WPS Player of the Week.